So, the House obsession has gotten pretty intense. I’m entirely past the horror of watching medi-gore — I still avert my eyes from time to time, but less often — and entirely into the compelling personality of Dr. House. And when I say “into” I do mean “into.” So much into, in fact, that I feel the urge to take a nostalgic tour of the Top Ten TV crushes of my life.

What do they have in common? In every case, it was definitely a crush on a character, not on the actor who played him … while I’m interested in actors, there’s a clear distinction in my mind. It’s definitely the fictional character I’m drawn to, just as I might be to a character in a book (and my literary crushes could fill a whole other blog entry). There’s a sense of humour, of course. And something darker — a sort of lostness or vulnerability or need that made most of these men attractive to me. It seems, looking through the list, that the dark side gets a little darker later in my life … possibly after my marriage to a quite nice man who is not terribly dark and brooding at all. Did my bad-boy fantasies need an outlet?

1. Jerome the Giraffe. I can’t explain why I was so drawn to the giraffe puppet on The Friendly Giant, but even as a preschooler I knew there was something special about Jerome. His voice and his big, soft eyes made my little heart melt.

Later in life I made two horrific discoveries about Jerome: he was pink and blue (a fact concealed from me by our lack of colour TV; I had always assumed he was, you know, giraffe-coloured); also, he apparently didn’t have a whole body, only a head and neck. Jason revealed this second fact to me when I was twenty-six years old and I have to say I was more than a little shaken up. He still finds this hilarious. When I mentioned Jerome tonight, Jason immediately burst into a soulful rendition of “I Ain’t Got No Body.”

2. “Alex” on the Uncle Bobby Show. Beautiful singing Alex with his guitar was my gateway into the world of Crushes on Human Beings. I found him irresistible and used to have fantasies (not those kind of fantasies!! Eeewww!!! I was four) in which Alex was in some terrible trouble and only I could save him (interesting to see how early my rescue-fixation kicked in, isn’t it?)

Alex (whose real name was Alex Laurier and who appeared on other children’s TV shows of the 70s, most notably The Polka Dot Door) didn’t appear to have much of a dark side. But why is it nearly impossible to find a picture of him online? Why did his career sink without a trace? Some of the online bios I read made vague references to him having had a “difficult life” since the Uncle Bobby days, but one site said he had been accused of child molestation, back in the day. (Funny, too, because if there was anyone on The Uncle Bobby Show giving off the creepy-old-man vibes, it was definitely Uncle B., not Alex. Looks can be deceiving, apparently).

UPDATE (June 2019): 13 years after I published this post, someone got in touch to very specifically confirm those rumours about Alex Laurier. Sad but true. I have clearly beat my friend Sherry’s record for Tragic Childhood Crushes, set after Grizzly Adams was busted for cocaine.

3. Bob from Sesame Street. Another smiling, singing man … but a little less sinister, apparently. You just call out my name, Bob, and you know wherever I am, even if I’m only six years old, I’ll come running!!

4. Gilligan. What more can I say? Hapless, feckless, the butt of everyone’s jokes — I loved Gilligan passionately. And what better object for a young girl with rescue fantasies than a man forever stranded on a desert island?

5. Captain Benjamin Franklin “Hawkeye” Pierce. This is the TV crush that really undid me, watching M*A*S*H at an impressionable age as I did. My first post-puberty TV love was doubtless the one who did the most to shape my image of the ideal man. Wisecracking, smooth-talking, yet deeply troubled — mostly by the fact that he was stuck in the Korean War for eleven years while the rest of the world only had to stay there for three. Recently we’ve been watching the early seasons of M*A*S*H on DVD and I’m impressed all over again with how handsome the young Alan Alda is, and how thoroughly well-developed a character Hawkeye is, for a 1970s sitcom.

M*A*S*H ended in the early 80s, and I went off to live in a college dorm without a TV set. My first apartment didn’t have a TV either, so there’s a long gap in my TV crushes till we get to the early 90s and …

6. Chandler Bing. I was a Friends fan from the early years and it was mainly my devotion to Chandler that kept me going when the show clearly jumped the shark. Chandler had it all — the smart mouth, the self-doubt, the inner demons. And, just for the record? Monica was never good enough for him! She treated him like trash!! On the whole, he would have been better off with Janice, in spite of her annoying voice. At least Janice adored him. As I would have done, given the chance.

7. Tom Paris. Through all my years of Star Trek fandom I never fell in love with Captain Kirk, Captain Picard — not even with Riker, really. And my interest in Mr. Spock was purely intellectual. But Voyager’s ex-con reformed bad-boy always had the ability to tug at my heartstrings…and maybe stir up a little Blood Fever.

8. Danny Kincannon. Unlike most devoted female West Wing fans, I was never head-over-heels in love with Josh, or Sam, or even Toby. Maybe closest to Josh, but I never wanted him for myself — just for Donna. It was the occasional guest appearances of Timothy Busfield as CJ’s devoted suitor (but still hard-nosed reporter) Danny that made me sigh happily. And since CJ was always kind of my alter ego (smart tall girl makes good), I was extremely pleased that Danny came back before series’ end to give the two of them a happy ending.

9. Captain Malcolm Reynolds. Be still my beating heart! If the hardened, embittered cynic with the well-hidden heart of gold wasn’t enough to make me shiver, the fact that Nathan Fillion is just so darned boyishly good-looking (and Canadian!) would push me over the edge. From the moment Mal kissed his crucifix during the battle of Serenity Valley, my heart was lost to the Firefly captain.

10. Dr. Gregory House. See what I mean about my crushes getting darker and more dangerous? From an innocuous pink and purple giraffe to a cranky, sarcastic, misanthropic Vicodin addict — who also happens to be the world’s most brilliant diagnostician and, of course, a wounded man in need of a little love and healing. Which I, in my remotely controlled fantasies, am just the right woman to provide!

So there’s my tally … two doctors, two intrepid space explorers, two musicians, one first mate on a tour boat, one journalist, one guy who did something with data entry that no-one could ever remember … and a giraffe. And each and every one found the way to my heart. I wonder who’ll be next?

I’m Trudy J. Morgan-Cole. I write books, mostly historical fiction. I’m married to the one of the funniest men I know, and I’m the mom of two bright and beautiful young adults. I’m an adult-ed teacher who thinks my students are the bravest people on earth. I’m a Newfoundlander first and a Canadian second. I’m a Christian who loves Jesus, but finds some of his followers scary. I’m a Seventh-day Adventist who doubts, questions, and loves my church passionately. I blog about all this stuff, as well as about oooh! shiny things that catch my eye. You can email me at trudyj65@hotmail.com.

Click here to find out all about my books. 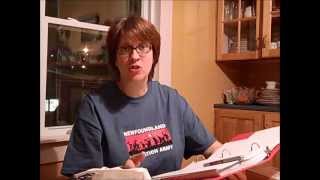