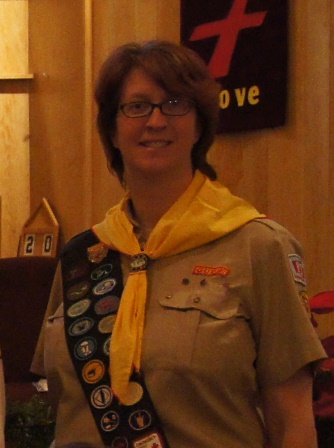 So yesterday was, you know, Kind of a Big Deal day for me. I’ve been involved with the Pathfinder Club, the youth organization of the Seventh-day Adventist Church (not to be confused with Pathfinders, a level of Girl Guides), off and on since I was 9. I’ve been a Pathfinder, a counsellor, an Adventurer leader (that’s the younger-kids division of the club); I’ve taught numerous honours and been Co-director of our local Pathfinder Club. What I’ve never been, till yesterday, is a Master Guide, which is the highest level of leadership in that organization. Yesterday at church Jason and I and some of our fellow church members who’ve been working towards that goal, all earned our Master Guide pins and scarves.

It was a surprising amount of work. If you’ve been involved in youth leadership in general and Pathfinders in particular for many years, as I have, then about half the requirements are ones that you’ve already done. The rest are ones that you look down through the requirement sheet and go, “Oh, I can do that.” And you can, but it’s actually much more time-consuming than you think. Our Master Guide leader decided that anyone who had done about 70-80% of the requirements and planned to keep working on them, could get invested as a Master Guide, but I had one of my rare bursts of perfectionism and decided I had to have every single requirement completed before the program ended (probably because I knew if I didn’t impose that deadline on myself, I’d never get it finished).

So, it’s an accomplishment I’m very proud of. But it’s not one I approach without mixed feelings, for three reasons:

1) It’s the highest level of youth leadership in a church that I have belonged to all my life and love deeply, but with which I frequently find myself in disagreement (especially with current world church leadership). I am a strong believer in the fact that if you love an organization you stick with it through good times and bad and try to effect change from within, but I know it’s discouraging sometimes to be aware that even as I’m receiving this hard-earned honour from my church, there are people in that church who consider me “not a good Adventist” because of some of the questions I’ve been known to raise and the doubts I struggle with.

2) After a lifetime in church youth leadership, now finding myself the parent of two teenagers, I find myself questioning, “How do we measure success in youth work?” For a lot of years I think I bought into the belief, at least partly, that youth leaders had done a good job if kids stayed in the church. But as I look back at my own crop of friends who went through Pathfinders with me as a teen, and all the young people I’ve led through Pathfinders and youth Sabbath School in the decades since, I see the same mixed bag of people who stayed in church, people who left, people who left but came back, people who stayed for years then suddenly left in midlife … for all I know some of them could be coming back when they’re in their 60s. And there was nothing predictable about anyone’s trajectory — the kids who were the most “on fire” and active in youth programs were sometimes those who left not only our church but God and all religion behind them, while some of the most unlikely and unpromising candidates ended up becoming pillars in the church. For now, anyway. All of which is to say that life is a lot longer and stranger than I thought it was going to be, and everyone’s journey has twists and turns, and there is no point at which, as a parent or teacher or youth leader, you can say, “Ah! I have produced a Finished Product. This young person is now Complete, and All is Well.” More and more I’m coming around to the belief that if, as an adult, you can be one positive, encouraging influence in a young person’s life — one of the people who adds to them rather than takes away — you’ve done as much as you can expect to do. Which is not to say that I no longer think youth work is worthwhile — I still do it, still love it, and still believe in it — but my perception of what it means and what its aims are has shifted over the years.

3) This may sound ridiculous coming from a 48-year-old, but I have never in my entire life received any kind of honour, accolade or award, no matter how insignificant, without my mom being in the audience. Seriously, not ever. And while my dad was there yesterday, faithfully taking pictures (as were my kids, when I told them “This is important to me!” and my husband who was receiving the same honour right alongside me) … still, there are some absences that can’t be ignored. My mom would have been there. And she wasn’t. And I think that’s going to hurt every single time something good happens to me for the rest of my life. So, there’s that.

But with all those caveats in place, I’m still pretty pleased to have finished the Master Guide program and be able to wear those multicoloured stripes on my Pathfinder scarf!

One Reply to “Accomplishment (with mixed feelings)”