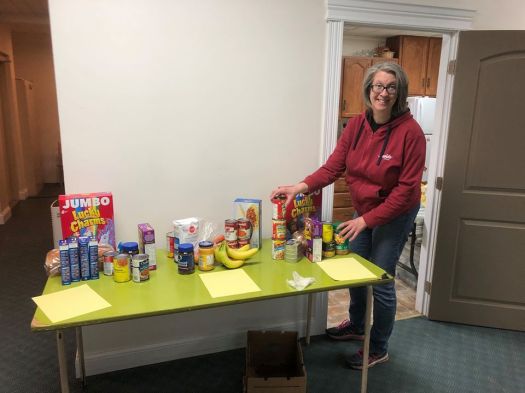 Above is a not-very-great picture of me doing the thing that has, hands-down, given me the most personal satisfaction and enjoyment during the long weeks of pandemic lockdown: preparing food hampers for home delivery out of our (otherwise unused) church basement.

For five years we’ve been running a hot meal program every second Sunday, but in early March it quickly became apparent that having a random group of people come in, sit down together, and eat food prepared and served by a variety of volunteers was not going to work for the foreseeable future. We shut down the meal program and looked for other ways to be useful in the community.

With one of the largest food banks in town temporarily closed due to COVID-19 precautions and other programs operating with limited staff and hours, we felt the best service we could offer was a grocery delivery program for those who not only found it hard to afford food, but hard to get out and either shop or line up at food banks, especially in a pandemic.

Since late April we’ve been delivering groceries to about 20 households — mostly seniors, disabled people, or single-parent families with young children — every week. For the summer months, with demand slacking off a little, we’ve just switched to doing it twice a month. A good crew of volunteers, and some funding from our church’s national relief organization and other groups, has made this possible. Organizing the program has taken a lot of my time over the last few months; it’s been a welcome distraction and a way to feel useful in a difficult time.

And yet, I feel uneasy about statements like that last one. Because on one level, it sounds like I’m saying, “Helping others through a hard time has helped me get through that hard time, also.” Which is great.

But if you dig a couple of layers deeper, you get to, “Other people’s suffering [in this case, their inability to buy food for themselves] has provided me with an opportunity to feel good and valuable.” And that’s … pretty ugly.

For those of us who enjoy doing “works of charity,” whether in our paid job or our volunteer work (I do both, as I work for a charitable-focused nonprofit), there can be an uncomfortable kind of equation happening here, where someone else’s misfortune equals my opportunity to shine as a “helper.”

I mean, if you’re going to make yourself feel good from the misfortune of others, it’s definitely better to achieve that by helping those others, rather than by causing their misfortune, which obviously some folks do. I’d always choose to be one of the helpers; most of us would. But being a giver of charity raises awkward questions about the reasons for that charity.

What would make the situation in my city better, so that hot meal programs and food banks weren’t required? Well, universal basic income would be a big one. Under a system with adequate UBI, would there still be people who would have difficulty purchasing and preparing food? Sure, but we could imagine a lot more societal supports being put in place to give people greater independence in meeting their food needs, so that the number of people who would have to rely on any kind of “charity” to put food on their tables would be far, far, far lower than it is now.

Which would be great. Only … what would us do-gooders do, if we had no soup kitchens to run, no food banks to organize?

In my day job, I teach at an adult-education centre, mainly serving young adults who did not complete their high school programs, often due to mental illness, physical illness, family dysfunction, or other issues. What would it look like to not need services our centre provides? Well, the school system would have to become much more flexible, much better at adapting to a variety of needs and learning styles.

And if they did? I’ve heard co-workers talk about plans for better student retention in the public school system and jokingly say, “Well, they’d better not get too good at retention or we’ll be out of a job.” And while it’s very important for me to stress that the co-workers who made those comments were absolutely making a joke and are in favour of more kids staying in school — there’s a kernel of truth there, for all of us in the “helping professions,” isn’t there?

If the public school system was creative and flexible enough that everyone could successful achieve a diploma, we wouldn’t need adult education teachers. If everyone had the money and skills to buy and prepare their own food, we wouldn’t need the volunteers who run soup kitchens and food banks. Are there times when we fall so in love with the act of helping, the image of ourselves as helpers, that we become shortsighted – we are OK with keeping people in a position of dependence, of need, because we want to feel needed?

In one sense, of course, this is a purely academic argument. No matter how much fairer our economy gets, how good our social services are, we don’t live in the Garden of Eden. There will always be enough people in need of help — some kind of help — to keep us chronic helpers busy, getting our fix of do-goodism. If everyone had enough money to buy food, I could probably have organized a personal shopping and delivery service anyway for the people who couldn’t get to stores. If public schools retained everybody and every kid graduated, I wouldn’t have a job in adult-ed anymore, but those public schools would need a lot more teachers skilled in dealing with, for example, high-anxiety students, so my skills could still be put to use somewhere. There will never be a shortage of people to help.

But there’s another way in which the desire to be a helper, to provide “charity,” can be a trap in and of itself — if we divorce charity from justice. If I’m happy to volunteer at the soup kitchen or the food bank without asking “Why are people hungry?”, campaigning for a higher minimum wage and UBI, supporting political candidates who will work towards those goals — then I don’t really want people’s lives to be better; I just want the thrill of being a helper.

If I am happy to teach people who’ve dropped out of school without asking, “Why are people dropping out, and what can I do to support those who are working to prevent that, to make school fairer and more accessible for everyone?” — then I’m not really working for a better education system; I’m just enjoying my own smug sense of “goodness” for being a teacher who helps “those in need.”

Maybe charity shouldn’t be necessary, but it is. And it’s important, and lots of us love doing it. But we can never see it as just an end in itself. While we’re delivering the food hampers or dishing up the soup or opening the doors of the shelter, we also have to be working towards the bigger picture: a world in which food banks and soup kitchens and homeless shelters are not necessary. A more just world.

It’s great to light a candle in the darkness, to brighten the corner where you are. I hope to always do that.

But if the reason our corners are dark is because lights are burning out all over the house, then maybe we could also screw in a few new bulbs here and there? Or, at the very least, hold the ladder for someone else to do so? Maybe if we all do that, there won’t be so many dark corners in need of candles, and we can all see our way to a better world.

2 Replies to “Lighting Candles in Corners: Some Thoughts on Charity”